Agile is done. What’s next?

Agile is done. What’s next?

Last week I tweeted a rather snarky joke about the current state of Agile software development and the results were overwhelming. There were a few snide reactions from Scrum Managers and the “you’re not doing it right” brigade, but the majority concurred with passion. In a rather niche field, thousands of people felt the need to share. What’s going on? 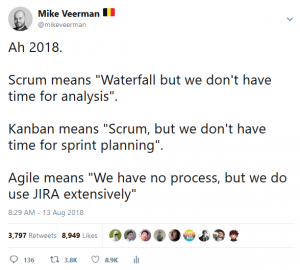 We are witnessing the end of the Agile movement. Software developers have been doing Scrum for two decades now and we’ve decided it’s time for something else. We’ve seen great radical ideas by visionaries watered down to old-school management quackery. We were promised better ways to build quality software. We got gurus doing Lego workshops instead.

I’m old enough to remember what happened before Agile was the industry standard. We believed in Big Upfront Design. We were taught UML was going to save us. If we could just specify the requirements in detail, CASE tools would build the product for us. We came up with BPMN and draggy-droppy interfaces to define “business logic”. Why? Because we didn’t trust software developers to develop software. “Business” defined the What and IT just mashed buttons.

XP and Agile were counter movements. They put the software developer back in the driver seat. They rejected the separation between Thinkers and Doers. We would discover the What through iterative design and experiments. The days of the Gantt charts and Use Cases were over.

Fast forward to 2018. Monstrosities like SAFe are the laughing stock of the dev community. We have Digital Transformation Consultants with no technical knowledge, teaching management how software is developed by throwing around ping pong balls. There is more middle management than ever and corporate software development is still mediocre.

In the last decades, the internet happened. We’ve found better ways of collaborating with colleagues in different time zones. We’ve laid the foundations for a distributed industry. Yet our offices are still built around commuting, office hours, all-hands status meetings and shuffling Post-it notes. If you take the pulse of the software development community, you’ll notice that we’re past this.

When the Agile comet hit the industry in the late nineties, the dinosaurs didn’t get it. They doubled down on their methodologies from the 70’s and were crushed by their competition. They lost market share and their best talent.

In twenty years, when Asynchronous Software Development is the industry standard, there will still be Agile Coaches trying to sell us “true Scrum”. There will still be managers who trust in “complete backlogs”, JIRA and year plans. There are still UML aficionados these days and people still design ERD’s. Crocodiles are still around.

If you are a software developer or you’re just starting out in the field: there has never been a better time. Our industry will take the lead when it comes to supporting creative knowledge work. We’ll collaborate in a distributed international environment designed to make us thrive. It will be more Open Source community and less Dilbert.

Agile is going the way of the dodo. Something better has come along.

It’s still early in this movement, so there is no defining literature yet.

For a clear indication of where we came from and what can be next, I refer to Jilles van Gurp’s recent article

For a more philosophical approach, I can highly recommend this article by Jessica Kerr.

Building software is hard, but don't let that stop you.

If you're building a product and feel like you could use a supportive techie in your corner, let's set up a quick chat to see if I can help you.